When an array of chemical sensors is exposed to an analyte, each component of the array interacts with the analyte in a different way and to a different extent, depending on its peculiar properties. Thus, the array’s response delineates a pattern, whose "shape" (signal intensity, position) is typical of the interacting species that generated it. With enough diversity in the sensing array, each analyte may generate a different pattern, so even an array of poorly selective species can act as a highly specific sensing system.

In short, the "trick" in pattern-based recognition lies in the use of multiple receptors at the same time. On its own, none of these sensors provides enough information to tell apart multiple analytes, but combining the bits of information provided by each one affords a more powerful system capable of much better discrimination.

Thanks to our accumulated knowledge of the nature of the interactions of small organic molecules with a number of water-soluble polyelectrolytes (see project below), we have implemented a similar approach to construct optical sensor arrays using self-assembled structures based on such poly-electrolyte scaffolds. These self-assembled sensors are prepared from commercially available starting materials, and their response is monitored through optical spectroscopy to provide differential sensing systems such as those described above in the pattern recognition approach. In particular, we are interested in sensing biologically relevant anions, such as the carboxylates involved in the citric acid cycle, and phosphates with biological, environmental, and public safety importance. 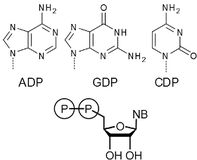 We have constructed chemical sensors using fluorescent dyes and dendritic polyelectrolytes; thanks to the dendrimers' excellent water solubility, these sensing systems work in neat water buffered at neutral pH. We have recently reported on the successful use of such a system that discriminates among biologically relevant nucleoside diphosphates, using an indicator displacement technique paired with multivariate data analysis (Chem. Comm. 2014).

The differences in response of these simple self-assembled chemical sensors are so subtle that no single analytical signal can be used for unambiguous discrimination of the analytes of interest. In other words, classical univariate methods don't usually capture enough information to carry out discrimination of these analytes. Much richer details can be collected by using multivariate detection, i.e. by collecting multiple analytical signals at a time for each sample. Although powerful, this techniques generates complex and unwieldy data sets to describe each sample that must be processed through appropriate data reduction techniques. Data analysis methods such as principal component analysis and linear discriminant analysis allow us to do just that. These methods are quite common in information processing fields (e.g. voice / facial / fingerprint recognition) and are available in multiple common statistical analysis packages.

We have recently extended the scope of our system to organophosphates. We developed a fluorescent turn-on sensing array that can detect and discriminate organophosphate herbicides and nerve agent related compounds in water solution at neutral pH (JACS, 2014). 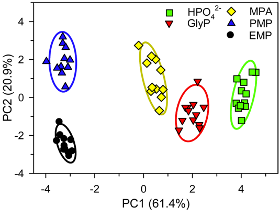 An example of the results of PCA pattern analysis used for the discrimination of glyphosate (a common herbicide), nerve gas agent simulants ethyl methylphosphonate and pinacolyl methylphosphonate, and inorganic phosphate is shown on the left. In the case of this panel of analytes, we have also accomplished quantitative detection of selected organophosphates, an important step towards practical application of such systems. 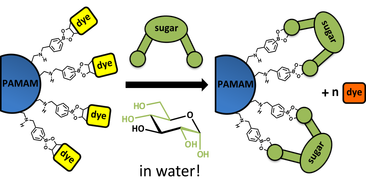 More recently, we developed a water-soluble array sensor for simple sugars by modifying the surface of an amine-terminated PAMAM dendrimer with boronic acids. Boronic acids are well known as receptors in chemical sensors for sugars. However, their binding affinity is usually poor in H2O. We improved these parameters by covalently connecting boronic acid moieties to the surface of third-generation poly(amido)amine (PAMAM) dendrimers, to form PAMAM-boronic acid hybrid receptors. Using dyes such as 4-methylesculetin and alizarin Red S that contain a diol functionality and are able to bind to boronic acids, we built a non-covalently assembled indicator displacement system that could be monitored simply by absorbance and fluorescence spectroscopy. We then studied the interaction of these PAMAMba receptor with monosaccharides (e.g. fructose, glucose, galactose and ribose) and disaccharides (e.g. lactose, maltose, sucrose and trehalose). We demonstrated the use of these polymer-based sensors in a multivariate array sensing platform for the discrimination of common mono- and disaccharides in water as a proof of principle towards their broader applicability in physiologically and environmentally relevant conditions (J. Mater. Chem. B, 2015).

We are currently working on developing sensors for other biologically relevant anions, such as the carboxylates involved in the citric acid cycle, and for transition metal cations (in collaboration with Prof. Karl Wallace's group at the University of Southern Mississippi). 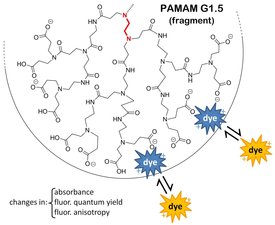 We study the formation and properties of such aggregates through optical spectroscopy (absorption, fluorescence). We use charged fluorescent dyes and other non-fluorescent molecules as molecular probes because the optical properties of these probes are very sensitive to the probes' immediate molecular environment, and therefore they report on their binding behavior.

We found that electrostatic interactions are dominant in these systems. In addition to that, we have also identified secondary interactions that provide interesting minor selectivity to these interaction; for instance, dendritic polycations terminated by ammonium ions have been found to bind preferentially to structures containing aromatic moieties. These results have recently appeared in the literature (Macromolecules, 2014).

Small Simulants of PAMAM Dendrimers and Other Polyelectrolytes:

Studying the interactions of the large polyelectrolytes discussed above with smaller organic molecules is intrinsically challenging due to the sheer size and complex structure of these macromolecules, and yet further applications of these macromolecules depend crucially on improving this knowledge. Our own attempts at using optical spectroscopies to gain such insight are still hampered by the limited direct structural information that these optical methods can gather.

We therefore decided to synthesize a series of small-molecule analogues of these macromolecules that could be studied with classical investigation methods. In particular, we are interested in carrying out NMR and isothermal calorimetric studies to obtain the thermodynamic parameters associated with the interactions of these smaller model systems with our typical organic targets.

The set is made up of an "intact" model, i.e. a small molecule that contains all key functional groups typical of the large polyelectrolytes, together with a series of "knockout" models. Each knockout model focused on the elucidation of one particular intermolecular interaction, by eliminating that interaction's structural handle from the skeleton. Pairwise comparison of each incomplete "knockout" molecule with the intact model in their ability to bind to a reference anion will provide insight into the strength and relative importance of key intermolecular interaction modes.

We are developing simple and versatile synthetic pathways to prepare each molecule in the model set, together with validation experiments to ascertain that results obtained from these models translate well to macromolecular polyelectrolytes.

Polyelectrolytes can bind to small anionic molecules in more complex ways, perhaps including cooperativity in the binding process. Comparing the binding strengths of our knockout models to reference anionic probes with that observed for the intact model compound, and ultimately for the dendrimers, with the same anionic probes will help us elucidate the extent of cooperativity and multivalency of these systems, as well as hint to the nature of the binding interactions established in water.